We've been vegans for about nine months now and have yet to have a vegan cheese that either of us have been satisfied with. Despite the buzz, Daiya is a little gross and doesn't really taste like cheese, rice-based cheese is just disgusting, and the Trader Joe's Italian Cheese blend, while melty and the closest in taste that we've found, made the baby choke when we made pizza in January and is generally unavailable. It's been a bit discouraging. 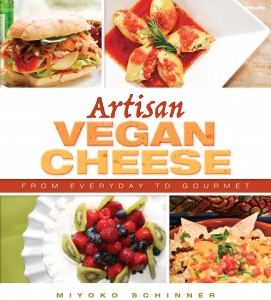 by Miyoko Schinner for Christmas. I have to admit that the cookbook has been sitting, ignored, on the cookbook shelf for several months. I really don't have a good excuse for this. Mostly I'm just lazy.  But no longer!

Ian picked up the needed ingredients to start two cheese recipes in the coming two weeks: air-dried cheddar and a quick yogurt cheese. We're starting our rejuvelac this evening with hopes of some good vegan cheese by next weekend. I also noticed that we have everything to make the cashew cream cheese on hand... so I might get that started tonight too. And who knows, perhaps a cheesecake will follow?

I'll update to let you know the results and perhaps share a recipe or two from our experiments. Okay, I'm rolling up my sleeves. To the kitchen!

Has anyone tried any recipes from this cookbook? Or any other vegan cheese recipes that have turned out well? (or not so well?)
Pin It
Posted by Unknown at 8:27 PM