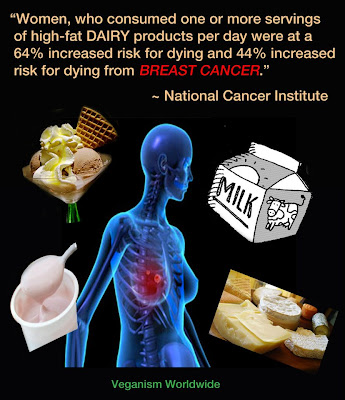 I saw an infographic on Facebook claiming that breast cancer survival rates were hindered by dairy consumption. Ever the skeptic, I checked out the facts. Turns out, it's legit:

"Women who consumed the most high-fat dairy products were more likely to die during a 12-year follow-up, compared with those who consumed the least, according to a new study published by the National Cancer Institute. Researchers followed 1,893 women who had previously been treated for early-stage breast cancer as part of the Life After Cancer Epidemiology Study. They found that the participants who consumed one or more servings of high-fat dairy products per day, compared with none to less than half a serving, were at a 64 percent increased risk for dying and 44 percent increased risk for dying from breast cancer. Dairy products monitored included cow’s milk, cheese, dairy-based desserts, and yogurt."