The Start of Vegan Cheese

We're starting to make our own vegan cheeses. Ian is really excited, and I have to admit that I am pretty thrilled as well. We're starting this project with the knowledge that just as it takes lots of practice to make dairy-based cheeses, it will probably takes us a few (thousand) attempts to get our vegan cheeses how we want them. Luckily for us, most of the legwork has been done already: we're working on a couple of recipes from Artisan Vegan Cheese

by Miyoko Schinner, who spent an entire year working on her recipes.

Ready for vegan cheese? We are! Here's an update about 14 hours after starting. 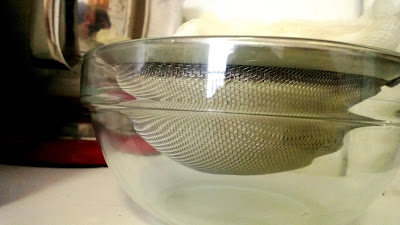 The basic yogurt cheese is pretty straight-forward: Put a colander over a bowl. Line with double layer of cheesecloth, enough so there is some over-hang. Fill with vegan yogurt of choice. Cover yogurt with cheesecloth and let sit for 12-36 hours, depending on what flavor or consistency you want.

I started with 24 ounces of Whole Soy & Co. Unsweetened Plain yogurt. After the yogurt has been sitting overnight, I'm starting to wonder if I made the right choice - this yogurt is quite tart to begin with - is this going to make for a super tart, inedible cheese? I hope not. Either way, we're going to try making our own yogurt next time, one batch with soy milk, the other with almond milk, and see how they taste on their own, and as yogurt cheese.

After 12 hours of sitting (about 9:00 am this morning), the yogurt cheese was supposed to have a sour-cream like texture and taste. We're looking for something a bit thicker, to spread on bagels, or perhaps as part of a topping for broiled peaches (with some sugar added, of course), so we're going to let it sit until this evening.

UPDATE: We let the yogurt cheese sit for 36 hours total. It ended somewhat thick - thicker than sour cream, but not quite as thick as cream cheese. The cheese was tart and smooth, very tasty. We ate some spread on crackers (the baby loved it). The rest I beat with a little vanilla and some sugar to make a sweet cheese to eat with broiled peaches and to dip apple and pear slices in. It was hella good. 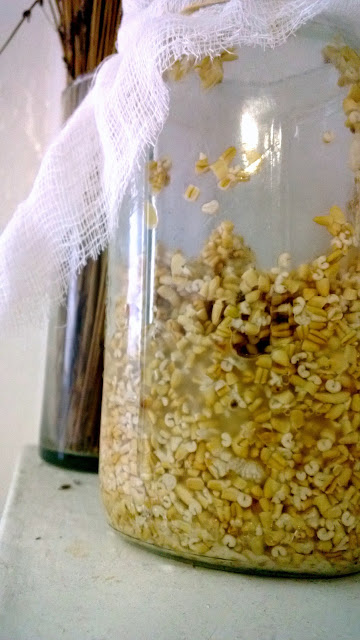 Before reading through Artisan Vegan Cheese, I'd never heard of rejuvelac. Rejuvelac is basically a fermenting agent made from sprouted grains. It's a necessary component in many of Schinner's cheese recipes.

This rejuvelac is Ian's baby. He measured out a cup of steel-cut oats (which we are about 95% sure will work), topped them with water, and covered them with a double layer of cheesecloth to sit for 12 hours. Our recipe states that you should keep the rejuvelac in a nice warm area, out of direct sunlight, so ours is hanging out next to the hot water pipes in the kitchen, getting cozy with a vase of dried lavender.

This morning he rinsed them off, put them back in the jar, and added just enough water to moisten them. We're supposed to do this once or twice a day for two or three days, until they've sprouted little tails. Once the tails are about 1/4-inch long, you place them in a larger container with about 4 cups of water. 12-14 hours later, you have rejuvelac.

I'll post further updates and pictures as we move forward.