After making cupcakes this weekend, I felt invigorated,and ready to continue my quest for the perfect vegan chocolate cupcake. Damn it, I know you're out there! 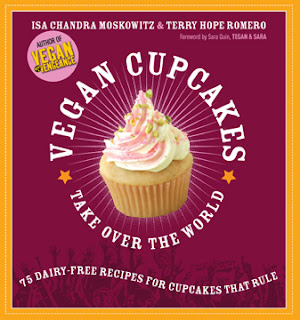 This afternoon, I whipped up the chocolate cupcakes from Vegan Cupcakes Take Over the World (referred to as VCTOW moving forward) by Isa Chandra Moskowitz and Terry Hope Romero. Everything felt a little easier with these cupcakes - the ingredients were straight-forward, the measurements made sense, and they were lovely and simple, from start to finish.

Granted, these cupcakes aren't gluten-free, but they also don't claim to be the best cupcakes in NYC (by the way, there is no way on earth that the same cupcake recipe I followed carefully on Saturday matches any sort of recipe from the baker that makes the best cupcakes in the city, Ian and I call bunk!), and so don't have impossible standards to live up to.

So, my initial thoughts to compare:

The cupcakes I made two days ago from Babycakes are more interesting; the flavor of the cake itself is much deeper and fudgier, though a bit muffinesque in texture and crumb. The frosting was a big fail: too high maintenance (has to set 6+ hours before spreading, then requires the cupcakes to be refrigerated for storage, which completely destroys the texture of the cupcakes), difficult to spread (these are some ugly cupcakes!), has a very distinct 'soy' taste to it, and is grainy.

The cupcakes I made this afternoon from the VCTOW cookbook were good. My neighbor L., Designated Cupcake Taster #3, said her cupcake was comparable to one you'd find in a bakery. Ian, to quote, said, "This tastes like a cupcake from childhood. I can't believe this is a vegan cupcake." All good, right?

Maybe... I agree that it was a very good cupcake, certainly more of a success than the Babycakes recipe, but it tasted generic to me. The cupcake tasted and felt like it came from a box mix, and while the frosting had a slightly deeper chocolate flavor than you'd find in a frosting tub in the store, it was almost identical in texture and taste.

Some might be satisfied with that, but, as you may recall, I am an obnoxious baker that is looking for amazing texture paired with an interesting and distinct flavor. It was a good cupcake, but it didn't sing. So how do I accomplish this?

Whisk together the soy milk and vinegar in a large bowl and set aside for at least 10 minutes.

Meanwhile, whisk together the flour, cocoa powder, baking soda, baking powder, and salt. You may need to sift the mix if you have any lumps or clumps. Set aside.

Stir in the sugar, oil, and vanilla into the soy milk mixture and beat until foamy and well combined (if you used sucanat, it will be grainy and settle towards the bottom - don't worry about this). Add half the dry ingredients to the wet in two batches. Beat until no large lumps or clumps remain.

Pour the batter into the liners, so they are almost full (a little over 1/3 cup). Bake 17-19 minutes, until a cake tester inserted into the center comes out clean.

Adapted from Vegan Cupcakes Take Over the World


Using a hand mixer, beat the coconut oil and margarine until well combined and fluffy. Add the cocoa powder, continuing to beat until smooth. Keeping the mixer on medium, add the powdered sugar in batches, adding a splash of soy milk here and there as you go to keep it moistened (but be wary of adding too much!). Add the vanilla, and beat until light and fluffy, 2-3 minutes more.